To varying degrees, craft beer drinkers are by nature ‘yeast prospectors”; always searching for that new or unique flavor in a beer that unbeknown to them comes from yeast.  Many do not know the role of yeast in producing flavors, look and aromas. Those unique tastes and aromas that gives each craft beer a distinct style signature is from, to a great extent, the contribution of yeast. The adage is: no yeast, no beer. Interestingly, yeast has always been ubiquitous in nature-Wild Yeast. This does not diminish the fact that barley and hops are important too.

“Yeast plays an underappreciated role in beer flavor”, says Eric Abbott, Global Technical Advisor for Lallemand Brewing. “Of course, yeast converts sugar into alcohol, but the specific sugars each strain metabolizes will determine whether the beer will be sweet and full bodied or crisp and dry. Yeast affects aroma by producing fruity esters and spicy phenols or can leave the beer clean and neutral. Yeast can influence whether the beer will be hazy or crystal clear. Some yeast strains even have the ability to interact with hop compounds to release additional aroma compounds, a process called biotransformation. There is no beer characteristic that is not influenced by yeast.”

Obviously, there are risks in using wild yeast because a brewer never is sure how beer will turn out once fermentation is complete. But this is the risk in yeast prospecting and innovating. However, this does not stop researchers from looking to wild yeast for some new commercially viable yeast. It all about flavors and understanding the performance of various yeast.

I am mentioning wild yeast upfront because that is how beer came about 10,000 years ago-naturally.  Today there are brewers that have resurrected this art form and specialize in only wild strain yeast beer. Wild Mind Ales in Minnesota started their brewery by going around the state prospecting/collecting yeast strains from various wild fruit bushes, trees, and wildflowers. They wanted the unique and wild flavors from natural yeast used in their saison, farmhouse and sour beers.

“The cool thing about wild, isolated strains is that you can have something that is both truly local and also proprietary to you,” says James Howat, co-founder-Black Project Spontaneous & Wild Ales in Denver. Further, “Yeast is really a way for a brewery to distinguish themselves,” says Eric Lumen, co-founder-Green Room Brewing. “All breweries have access to pretty much the same raw ingredients, yet wild yeast can set a unique and interesting flavor to a product.”

Yes, there are innovations involving wild yeast. The latest new yeast development was announced in June 2020 by Lallemand, an innovative yeast manufacturer. This new patented yeast is named Wildbrew Philly Sour with a technical designation-GY7b. The strain originated from a Dog Wood tree in a cemetery near the University of the Sciences in Philadelphia by a student of Dr. Matthew Farber-Director of Brewing Sciences. This yeast strain was found as part of a project. This new yeast is one of more than 500 yeast species for beer. According to Soft School there are thousands of varieties in total.

There are a lot of benefits of this new yeast in producing beer with unique flavors and aromas in the sour beer category.  This is a huge commercially viable discovery involving an organism that cannot even be seen with the naked eye.

Philly Sour is now being marketed to homebrewers and brewers worldwide. “Wildbrew Philly Sour allows for faster brewing time for making sour beer, because the yeast itself makes lactic acid, for the first time there is no need for brewers to introduce bacteria in their sour beer production line thus avoiding contamination concerns. Plus, it’s delicious,” says Dr. Farber.

As an aside, sour beer has been around for a thousand years, but it became more popular in the last couple of decades. In fact, there are a few brewers who produce only sour beers.

This discovery illustrates how a simple living cell, as old as time itself, produces beer. Beer has been produced for more than 5,000 plus years as a fermented beverage. It wasn’t until the late 1860’s, when Louis Pasteur isolated the yeast cell, that the ancient mystery of fermentation was defined. Before Pasteur’s discovery, brewers accepted that somehow wort simply started growing a foamy substance that made a delicious beverage. Now we sell yeast to brewers that are specific to their specifications for flavors and compatibility with their grains and hop requirements.

So, what is yeast and why should craft beer consumers be interested in knowing a little more about it? First, beer without the yeast is nothing but sugar water. In simple terms, yeast is a single cell, living organism, small but nonetheless a living thing. It loves warm temperatures, moisture, and a needs oxygen and a plentiful food supply. The food supply for yeast comes from the starches in malted grains that are heated in water to release the sugars. Various yeast strains react to the myriad sugars in wort (the result of boiling the malt mixture) to produce alcohol and carbon dioxide. In the end, selected yeast strains eat the sugars and gives off alcohol and CO2. and brings out the best of hops and malts.

The consumer appreciates the final craft beer product because of the alcohol content, visual appeal, flavors, aromas, and mouthfeel. All of this is facilitated by yeast.  Each type of yeast used is responsible for the character of a specific beer style to be brewed. Even yeast will contribute to the ‘head’ on a beer.

Here are some of the by-products of yeast that impact the consumer. Yeast creates esters, ketones and phenolics in the process of consuming sugars. To get a signature craft beer a brewer must pamper the yeast.  Pampering involves creating the right fermentation temperature, introducing the right yeast at the right volume, creating the right water chemistry, and having the proper sugars in the wort for a specific yeast to render the desired style of beer.

“To get ever more unique flavors and aromas, use more than one yeast strain in a given beer and add the yeasts at different stages of fermentation,” says Charlie Gottenkieny of Bruz Beer. So, it is obvious the process of turning sugar water into a beer must be constantly controlled. Making a craft beer is very much a cerebral exercise, it is anything but being a “no brainer”.

American Homebrewers Association points out: “Yeast contribute more than 600 flavor and aroma compounds which add complexity and nuance to beer. Beer can build upon, showcase, or even diminish malt and hop flavors. One yeast strain might leave a residual malty sweetness while another might dry the beer out leaving a punching perceivable bitterness.”

Yeast manufacturers also publish detailed data sheets on each yeast variety. These specifications give brewers pitching rates, fermentation time, temperatures, attenuation rate, flocculation data and of course aroma data. A flavor and aroma wheel, shown below, are offered by manufacturers so brewers can visualize a specific yeasts’ suitability for a beer style.

If you need more help in defining your interest in craft beer flavors, here is an interesting graphic from Locale Magazine. 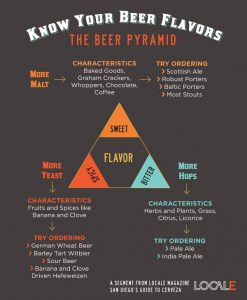 An easy reference to test your favorite style-Go to Gallery on left to enlarge. Source: Locale Magazine San Diego

Each of the yeast houses provides a wide assortment of strains. There is some overlap of cultures, but some are unique strains cultured by each company exclusively. So, it is hard to say who provides the largest assortment.  But Lallemand does seem to focus on innovations in yeast and flavors.

The latest in yeast. In doing research for this article I saw a webinar on November 12, 2020 sponsored by Lallemand Brewing about “Biotransformation”. In addition to scientists from Lallemand Brewing, Dr. Thomas Shellhammer made a presentation explaining new discoveries and analysis on Lallemand yeast products that are designed to enhance flavors and aromas in hops. (Note: Dr. Shellhammer is the Nor’Wester Professor of Fermentation Science at Oregon State University and is an internationally recognized expert in hops chemistry. His lab studies the contribution of hops to beer flavor, foam, and physical & flavor stability. Dr. Shellhammer got his PhD from UC Davis and did research there.)

The webinar presented new yeast research data specific to a new approach to matching specific hops and yeast called Biotransformation–defined as the chemical modification made by an organism (yeast) on a compound (derived from oils in hops). These findings impact even the casual lover of craft beer, as the findings recognize newfound interaction of a hop compound and a yeast strain that create ‘new’ aromatic compounds. This process is initiated by enzymes in yeast working with certain hop compounds in fermentation. Craft beer consumers should anticipate some new enhanced aromas and flavors coming from hoppy IPA’s.

Yeast influences the hop character of the beer which is the point all beer consumers know and appreciate. This new study is starting to revolutionize the way some craft brewers think about how yeast react with hop compounds and vice versa. There are compounds in hops that are non-aromatic but with specific yeast strain enzymes they can release new aromatic/ flavor from hop compounds in beer.

The benefits derived from this new yeast enzyme research include:

Interestingly, some brewers in the EU are starting to note on their labels specific yeast strains and hop varietals used in their beers as part of a new approach to beer branding.

My go-to source for information on trends in the Craft Brewing industry is Dr. Bart Watson, the resident Chief Economist at The Brewers Association. Craft beer seems to be built around community and quality; quality of ingredients and innovation. My comment to Dr. Watson is: There seems to be a trend in the U.S. and EU with craft brewers opting to add varietal names of hops and yeast strain on their labels. “I’ve seen yeast a bit less, but brewers are definitely listing hop varietals on their labels/in their brand names. I wrote about this in my GABF recap this year: “Citra” was the most common,” says Watson.  “For yeast, you do see it some, and I think you’re seeing it a bit more recently, but it’s still much lower than hops. For example, a lot of the people using the new kveik yeasts are calling it out (or at least the category, if not the particular strain).”

Here are some examples of brewers prominently using ingredients to reenforce quality ingredients in branding message. These are 3 examples where varietal hops are listed by name and vendor. 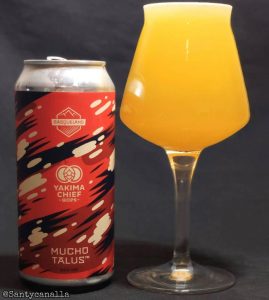 EU brewers use specific yeast and hop names on labels. Basqueland Brewing in collaboration with YCH IPA with Talus™

With more transparency in labeling craft beer consumers will become  informed and educated about the beer brands, styles, and ingredients. When it comes to exploring new yeast from the wild/open spaces or new ways of introducing yeast’s to hops used in fermentation, consumers will benefit with new flavors and aromas. There is an abundance of on-line information available to consumers who want to understand specifics about a yeast or hop a brewer has used in making a beer. The “flavor wheel” above is one example of technical information being available that is written for the general public.

Keep exploring new craft beers and brewing techniques with new ingredients because there is a great deal of sophisticated research specific to beer sciences underway all around the world.