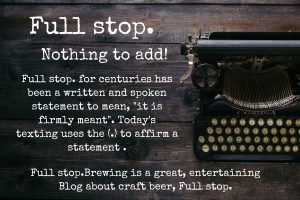 Water Brings Life to Beer! Chemistry is the Science! 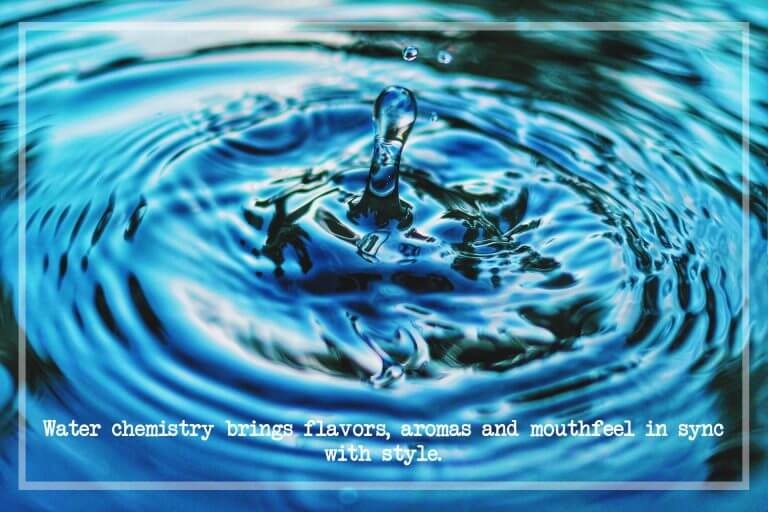 Water May Not Be the Most Important to Making Beer, But it Can Sure Ruin it!

Water Chemistry is specific to every beer style.

All the focus now seems to be on hops, barley malts and yeast. But, if beer is 95% water shouldn’t we think about the impact water has on flavors, aromas, and mouthfeel also? If you have ever tasted unpleasant water, it would probably not be an ingredient you would want in making a crafted beer.  Frankly, water is one of the most economical ingredients in beer, so make it the best. You want the right water chemistry for the right beer style.

Now is probably not the time for complicated discussions about atoms, ions, and the periodic table, so the focus here is on discussing the importance of water chemistry in achieving an optimal flavor in your beer. Frankly, there are many tools on-line to make this process simple and fun. If we understand a few basic principles of water chemistry, then homebrewers will know what to consider about the water chemistry relative to the next brew day.

When I was young, I spent summers on my grandparent’s farm. The property was dotted with open pits where someone had explored the viability of acquiring mineral rights for iron ore; obviously, there was a presence of iron in the ground.  It wasn’t a big secret because of a metallic bitter taste in everyone’s well water. The heavy concentration of iron minerals in the ground gave well water a foul taste and aroma. Now, imagine the impact such non-treated water would have had on brewing! But even today, municipal water can have issues beyond inherent mineral composition.

Water chemistry is important because the water we use in brewing does interact with wort, esters/oils from hops, barley malts, and especially yeast. All this also explains why temperatures in brewing are important; everything in brewing interacts when in solution.

In spending time as a homebrewer, I now appreciate just how sensitive people’s taste are relative to minerals/ions and chemicals in water, I am thinking of lactic acid for example. Water used in brewing effects performance of yeast, malts, and hops, which will impact flavors and mouthfeel. Chemists that conduct water research and testing talk about the Ions (exceedingly small particles) in water that can have a significant impact on taste. Unmodified water has a taste and even the taste of bottled waters are manipulated by chemist to achieve a desired taste profile.

So, just how important is water for beer? An authority on beer is John J. Palmer. Here are a couple of comments, from his book “How to Brew”, concerning the importance of water: “The best way to explain this is to describe two of the world’s most famous beers and their brewing waters. The Pilsen region of the Czech Republic was the birthplace of the Pilsener style of beer. A Pils is a crisp, golden clear lager with an exceptionally clean hoppy taste. The water of Pilsen is incredibly soft, free of most minerals and very low in bicarbonates.”

Palmer goes further, “The fact of the matter is that dark beer cannot be brewed in Pilsen, and light lagers can’t be brewed in Dublin (Ireland) without adding the proper type and amount of buffering salts. And toasted malts such as Munich and Vienna, can be used successfully in areas where the water is alkaline (i.e., a pH greater than 7.5 and a carbonate level of more than 200 parts per million) to produce good mash conditions.”

Detailed water analysis can be time consuming and expensive, if done through a commercial testing company. But there may be some comfort in the adage—If your water tastes good to drink it is probably good enough for your beer.

Hard water contains total dissolved solids that are mineral ions suspended in solution. For example: calcium, magnesium, iron, and copper; the latter two leave a metallic taste which is described as lacking a balanced pleasant taste. Conversely, soft water can have an equally poor quality—it all depends on the style of beer you are trying to produce.  For example, higher pH produces a smoother mouthfeel and taste.

I appreciate mouthfeel and malt flavors in craft beers. Generally, I like the finish (I call it after taste) that lingers a few seconds without high acid effects. For me I have focused on five minerals in beers that seem to impact my favorite styles the most: calcium, magnesium, chloride, sodium, and bicarbonate. I gravitate to the light, not acidity, malt flavors forward and offer good ‘head’ character/retention. So, I have come to appreciate the impact water contributes when making beer. But nothing is simple, now I am starting to understand how water chemistry reacts with wort temperature.

Dan Norris, in 2018 wrote in Black Hops, “The terms ‘hardness’ (the amount of dissolved calcium and magnesium) and ‘alkalinity’ (the amount of carbonate and bicarbonate) are two of the most important considerations when it comes to getting your water chemistry right.”

Of my top five major water chemistry minerals here is a recap of some of the impacts these minerals may have on beer:

Whatever a water analysis indicates, most every brewing supply store will have water modifying supplies-gypsum, carbonates, chalks, chloride, magnesium, etc.

My local water company get our water from surface sources-lakes and river. Below is the summary of some of the water chemistry reported by my water district. I offer it as a point of reference, it illustrates just how important it is to have good water chemistry and what you need to do to use it for making good beer. These numbers are generally high and dictate some amending to be for brewing-amending this water is required.

If you’re wanting to start brewing from a clean slate approach Scott Janish of Sapwood Cellars takes the approach that reverse osmosis is the best water to build upon. “Aside from temperature-controlled fermentations, starting with reverse osmosis water and building back minerals has made the biggest difference in the quality and consistency of my brews.”

Depending on what your brewing goals are, there are a plethora of sources for help. If your water comes from a municipality get that water chemistry analysis directly from them. However, be cautious because these numbers are not constant and can change during the year, especially with environmental events such as rain, snow, drought, and fires. Such events will impact water emanating from surface water sources-reservoirs.

For do-it-yourself analysis, LaMotte has a line of test kits that can be purchased, via Amazon or retailers. These comes highly recommended from John Palmer and Scott Janish. Costs are a little high but if you are going to perform frequent water testing then it is well worth the expenditure.

Brewers Friend is one of many on-line sources that have calculation tables that will tell you precisely how to adjust/modify your water source for brewing a particular style. Pro Brewer is another company offering a ‘water chemistry modifier calculator’. But realize you need specific test results to plug that data into the on-line calculator.

Because the style of the four basic ingredients (water, barley, hops, and yeast) you plan to brew with, interact with the others–you are always compromising. Tweaking one bit of the recipe you will be impacting something else. The minerals in the source water chemistry will probably need to be adjusted, that is part of the art of brewing. The final water chemistry will affect the yeast which is another reason why the mash pH is important. Water may not be glamorous, but it will impact hop aroma, mouthfeel, character of the malt performance, and how well the yeast will perform in getting to the finished product.

Water, Yeast, Hops, and Barley malts work together and will give you great beer but don’t forget the water. David Ackley, holds a General Certificate in Brewing from the Institute of Brewing and Distilling, summarizes why water chemistry is important, “It’s a given (good chemistry) will prevent spoilage. But in addition to that, the concentration of minerals in your brewing water can impact not only flavor, but also mash performance, acidity, hop bitterness, yeast health, body, mouthfeel, and other factors.” Ackley says the minerals in your brewing water can have a profound effect on the flavor of your finished beer. I would also add—head/foam.