Pigeon Head Brewery was acquired in May of 2014 with the goal of brewing quality traditional German style lagers. As success brewing lagers grew, so did the desire to explore the many other styles that craft beer has to offer. Over the last few years, Pigeon Head Brewery has pushed the limits with  rotating seasonal selections and maintaining their hallmark styles. The flagship lagers will always have a special place in our line-up and they seem to be always looking for new ingredients and character in their beers

The taproom is small and staff are available to discuss the offered beers and get customer feedback.

Although Pigeon Head Brewery is located in the Craft Beer District of Reno, they are expanding. Reno is within the drive markets of Truckee, CA , Lake Tahoe, and Carson, NV. We do suggest a visit. 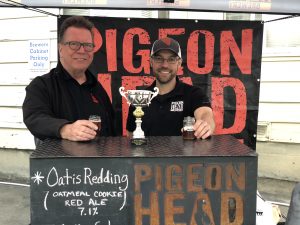 Bryan Kenneth Holloway, a graduate of the World Brewing Academy, is the Co-Owner and Head Brewer at Pigeon Head Brewery. Bryan started homebrewing in college before deciding to make the jump to brewing professionally in the winter of 2013. He has completed the International Diploma in Brewing Technology, which took place in both Chicago, IL, at the Siebel Institute of Technology, and Grafelfing, Germany, at the Doemens Academy.

After a short period of time in Temecula, California brewing for Wiens Brewing Company, Bryan landed back home in the area of Reno when he accepted the position of Head Brewer at Pigeon Head Brewery  in November of 2014. As of December 2017, Bryan Holloway and Peter Crooks, a long time family friend and fellow beer lover, purchased the brewery. The partnership turned their aspirations of brewery ownership into a reality as they joined forces on a mission to launch Pigeon Head Brewery to the next level and produce world class beer for all to enjoy.

Peter Crooks is the proud co-owner of Pigeon Head Brewery. He is a retired physician and former rock musician with a passion for craft beer. Formerly from Minnesota, he moved to Los Angeles after medical school where he lived until 2017 when he relocated to Northern Nevada.

This is his initial venture into brewing, but fortunately he has partnered with Bryan Holloway. “I wouldn’t be doing this if it weren’t for my belief in Bryan. He has brought Pigeon Head Brewery a long way in the last 3 years and it is my mission to support him and bring his vision to reality.”

In addition to keeping up his chops on piano and learning about life in Northern Nevada, Peter enjoys to travel and spend time with his two sons, Christopher and Matthew.
“While my new line of work is challenging, it is also rewarding at the end of the day to visit with our customers in the tap room. Getting to know them and hearing their ideas and feedback is critical as we introduce Pigeon head beer to a wider audience.

This is art and science.

Where do you see Craft Beer going in next 5 years, after Covid 19?

I see the Craft Beer industry growing over the next 5 years. I do not think people are going to stop drinking beer anytime soon; they haven’t in thousands of years. As craft brewers slowly steal some of the beer market from the macro brewers, we will begin to break into larger roles in the market. I think people are demanding better beer at the places that they visit and also want craft beer present at larger events, which in turn, gives us a bigger role and will increase our sales allowing us to grow our businesses.  With that said, it is a tough and competitive market and extremely hard for a new brand to enter the market at this point. I don’t know if you will see as many breweries opening as we have over the last 8-10 years. I think the breweries that are already in the market will slowly grow and need to adapt to the changes happening around them. It is a difficult business to be successful in as there is endless competition and the margins are small. You must be on your game 7 days a week to have a chance of survival in such a market. There is only so much tap and shelf space at restaurants, bars, and grocery stores.

What is biggest challenge for local brewers?

The biggest challenge for local brewers is staying relevant in a market that is flooded with good beer. Even the big craft breweries from California and other surrounding states have hired remote sales teams that live in Reno and work every day to steal our local shelf space from us. Many local brewers, including us, don’t have the money to hire a sales team to defend our tap handles. Luckily, the local restaurant and bar owners (in my experience) have been very open to supporting local breweries and are usually pretty good about keeping a well made, local product at their stores.

Is beer still looked upon as a pedestrian beverage?

I guess that depends on who you ask. I have never considered beer a pedestrian beverage. Beer can be adapted to fit so many roles and is considered an important part of people’s lives all over the world. I think beer is starting to take the place of wine in many food pairings and has (in my opinion) more potential with these pairings due to the vast diversity in beer styles alone. Even within these styles, there are many variations which open-up so many possibilities when pairing with food. Beer isn’t just a beverage to drink on a street corner, it can be used in more elegant settings as well. Don’t take my word for it, when the Coronavirus guidelines are lifted, we will resume our monthly beer and food pairings in our taproom. Come by and I’ll let you be the judge.

What are some trends you see coming?

Craft brewing trends are tough to predict. When I started brewing, everyone was striving to brew clear beer. Unfiltered beer was almost looked down upon in a way. Now people want Hazy IPA’s. I didn’t see that one coming! I think that is part of what makes this industry so fun. You have the ability to play with different styles and variations within the different styles and the consumer is almost always accepting of trying new things. I went to school in Munich, Germany. Unexpectedly, fellow brewing students at the academy being from Germany were jealous of American brewers because we have more freedom in brewing. The beer in Germany is very traditional and the German people take a lot of pride in that. If you put a pineapple milkshake beer in front of them they would ban you from their country, ha-ha! We have the freedom to play with different styles and test our imagination and artistry as a brewer, much like a chef at a fancy restaurant. Of course, not everyone wants a pineapple milkshake beer in America either. In my opinion, I believe people will start gravitating towards the lighter styles once again, such as Pilsner, a style that has stood the test of time……but that is yet to be seen.

To start a local brewery with tasting room, what are some costs in launching a new operation?

Of course this depends on what you are looking for. A frankenstein brewhouse made with old kegs is one way to get started, or you can pony up and spend the money on brand new equipment. The only real answer to this question is: “You need 4 times more resources than what you were expecting”. Most quality brewing equipment is stainless steel and that equipment is expensive. The bright side to that is if you take care of it, it will last you a lifetime and the equipment holds its value. If you are really interested in opening a small brewery, I would suggest getting into the market and talking with the breweries/brewers that are already in that particular area to get a good idea of what it would cost. Most brewers are down to earth and willing to help with whatever questions you may have. Not to mention, it is more helpful to make friends than enemies in this industry. You never know when you will need something from a fellow brewer. We all help each other out when needed, we have a wonderful community.

What are challenges going beyond local markets?

Pigeon Head Brewery has just recently expanded beyond Northern Nevada into Las Vegas. We don’t currently sell beer outside of Nevada so we are still learning what it takes to sell in other markets. I believe it is very important to establish yourself locally before expanding into other areas. When you approach distributors and buyers in other markets, frequently the first question they will ask is how your sales are in your own local market, they want a proven brand that sells well locally. With that being said, our Las Vegas market has been a slow start because we do not have a daily presence in the market. As mentioned before, we don’t have a sales team as of yet, so expanding the brand in a new area is challenging. In such instances, you are building something from scratch and it takes time. I have made it a point to personally travel to Las Vegas as often as possible and hit the market. I get a rental car and fill the trunk with beer, put on a smile and go out and sell the hard way. If I spend two days in Las Vegas and can put our beer at 2 or 3 different small bars; that I consider is a win. Having a full time sales person in a new market would do wonders, but it costs money. You have to do what you have to do to build the brand. It is a grind for sure.

What are most expensive ingredients you use and where do you get them?

Raw materials are all relatively expensive. There are several really great suppliers (many in the Sacramento area for the west coast breweries) in this industry that are very quick and resourceful so most ingredients at this level are fairly easy to get a hold of with the exception of some hop varieties. The most expensive may be the yeast. We can spend well over $1,000 for a single pitch of yeast for a 20 barrel batch of our lager beer. However, if you harvest the strain and use it over several generations, you can make that money go farther.  For us, packaging is very expensive. For those breweries that use cans or bottle their beer, the cost of materials is almost enough to not make it worth it. However, packaged beer will expose your brand to a whole new audience with the addition of grocery stores and other places that don’t sell draft beer. In turn, it can come back to you when a customer at a grocery store buys a six pack of your beer and ends up being a regular customer at your bar. It can all come around eventually. Is it worth it? In the short term it may not seem so, but in the long term I would say yes.